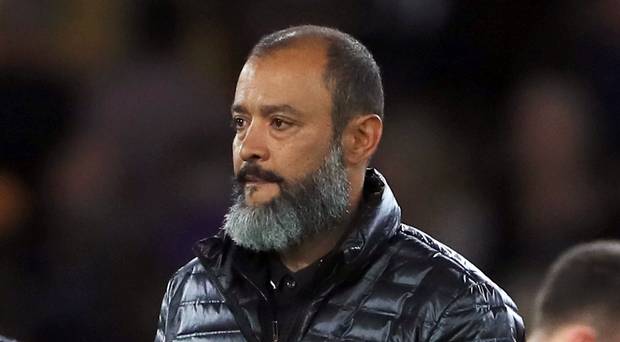 It’s been a long time since I sat down and waxed about Wolves. My Little Sister died about a month ago and I haven’t been massively well. It kind of put any thoughts about Wolves on the back burner for sure. Apologies. Thank you to my Patreons too who have been very patient.

So Arsenal want Nuno eh? Aside from the fact they won’t get him…not yet anyway. How horrible must it be for Emery to see and hear that shit when he is still in the job. Arsenal fan madness is a crazy fucked up thing at the best of times. You’ve been to the Emirates, you probably listened or watched the V-Logs and podcasts. Arsenal is not a happy, a motivated, or a creative space at the moment. I say the ‘moment’. They have never been happy. In fact they haven’t been happy since George Graham fucked off. And I’m old enough to remember Arsenal fan fume when he finally went. What would Nuno do there? How would Nuno help? Or here’s a better question. Why the hell would he leave Wolves? Arsenal are a bigger club. Of course they are. They’ve been sucking the Premier League tit dry for years without much to show for it. So now they are fat on their own sense of importance. They think Nuno would pack up his shit and be straight up Wolverhampton train station with a ticket to Euston. They can’t quite get their heads around the fact it ain’t going to happen.

Arsenal are having that strange period when all the Lizards have manoeuvred themselves into positions of power. The tight suits, the brown winkle pickers, the beards, the quiffs. Same shit at Old Trafford, same shit at Everton, same shit at West Ham. Lizards don’t bring any creativity to the party at all, they don’t bring any happiness either. Arsenal lack Kwan my friends. They have a great team, an amazing set up, history, past glory, they aren’t going bust any time soon. But would you want to pick up a demoralised squad with no belief, no heart and no Kwan. Then try to bring something of your own personality and your own Philosophy to a set up so soaked in flammable ball punching liquids a spark would set them off. I watch that fat Arsenal dude a lot on YouTube. All the fans do around him is moan and groan. Everything is negative, everything is doom and gloom. Arsenal have lost their Kwan and they think they can fix it with a direct injection of Nuno medicine. Grab the Mic, let your vitriol loose on the poor bastard. But Kwan isn’t something you buy, something you splash out a few million on. Kwan is something you have to develop through love and creativity. Wolverhampton Wanderers were ripe to develop some Kwan when Nuno arrived. I don’t think I’ve ever known our fanbase adopt a new Coach with such respect and hope before Nuno. I don’t think I’ve ever known one of our Coaches be linked with ‘bigger’ clubs before either. Arsenal want the Wolves Kwan not really understanding that Kwan ain’t one mans creation. That Kwan was made by players and by fans too. Nuno just channeled it maybe.

I watched Nunos press conference yesterday. I watched it very close. Nuno knows the vagaries of any kind of Press attention. Press Lizards want brief answers their thick readers can assimilate. I think Nuno was disgusted with the rumours to be honest. He’s a man of integrity and honour. He’s a man that understands the murky world of football reporting too. I think he was holding himself back from whacking people with chairs to be honest. His mind will be on Emery and what he thinks about the whole sorry mess. Emery is a great Coach and there is no doubt that he has banged his head up the wall so many times with this whole Arsenal idea that he is close to just throwing his lot in and saying fuck it. But, Nuno has been through the same shit as Emery. Nunos Portuguese football adventures were fraught from the off. But I think those days at Rio Ave and Valencia made their mark on him. Not in a footballing way but surely with the shit the local press and fans threw at him. Grief changes you. You can’t put everything you have into your job and be denigrated for it day after day. What were those days like sitting in traffic on the way to a training session and hearing that negativity? That Press madness. Not forgetting that the press in Portugal are actually raving headcases connected to bent business interests and political parties. Intense grief like that makes money an abstract thing. Grief like that spurs you on to make history by yourself, with your own idea and own creativity. Emery was never loved at Arsenal, their fans couldn’t find any in their hearts for him because he couldn’t give them what they wanted, fast. Patience. They didn’t have any. Instead of support and nurturing Emery was castigated from almost day one. What is a man like him to do now? He is the Captain (at the moment) of a sinking ship. There are a few other clubs like it too. You know who they are. The Lizards have wheedled their way in and are sucking the clubs dry with their negativity. Their quick fixes. Throwing money where really ideas should be. Ideas man…

That is what’s happened at Wolves. Here was a gilt edged chance to develop the ideas he had at Porto or wherever when he watched the players in front of him move and chase the ball, develop shapes, move, pass, attack, defend as the sun burned into his forehead in front of goal. Now at Wolves Fosun have given him the chance to put those thoughts and ideas into some sort of concrete reality. This truly is Nunos team, this team is an extension of what he is. Highly motivated, emotional, hard working and perhaps just as important, fun. We defend solidly, we attack with speed and aggression, we philosophise in midfield. We enjoy this idea of Nuno made on those sun baked football pitches of Spain and Portugal.

Now extrapolate this Nuno to the Emirates and you see what a strange idea it is for people to think for one moment he would pack up his stuff and take charge of a team that lack any of the above attributes. Also, it’s not only Nuno that is important in his whole crazy ride. What about the backroom squad? The Cathros, the Portuguese dudes, the medical staff, the team for fucks sake. I’m sure most of the squad are only here for Nuno, in fact I’m sure of it. If Nuno upped sticks and left then the work here would fall apart for sure. Not at first maybe but eventually. Then we would see Nuno on the touchline scrabbling to grab anything of worth at Arsenal who want everything right now and clutch their throats in the vacuum of their creativity. Nuno was mad at one thing I suppose…that the Press still haven’t got much of a clue at the Wolves revolution and how it operates. That, I suppose is because the whole Nuno thing is Philosophical as well as physical.

As I write most Wolves fans I know are trickling into Braga for our latest European adventure. There has been blood spilled already. I see this. The thing is with people from Wolverhampton…if you want aggravations on a riot scale you will get it. The Belgian Pedophiles from Standard Liege found that out for sure. So video footage of bunged chairs and tables, a few fists flying, rubber bullets have got a few people excited. Especially our favourite ex Talksport dude Tom Latchem. Bloody Wolves again eh? Not really. We are a happy bunch at the best of times, but we can be horrible for sure. As much as I love the odd punch up I was a bit sad we bumped into those Belgian wankers. I’m glad I wasn’t there. There were several people who remarked if I was I would probably be bleeding to death on the streets of Porto. They would be right too.

Fuck…the things they say about us. We are going to do a Burnley. Wait till the winter. All that shit, all that low level angst that trickles into our subconscious. Last on match of the day again. Nobody will ever say anything nice to us or about us apart from the odd enlightened soul in the broadcast or print media. We are on our own I suppose but haven’t we always been? But here is a chance at least. A point tonight sees us in the knock out rounds. Can you fucking believe that? I said in one of the books we would be singing arm in arm down some European City street, I told the BBC that we would be in Europe at some point and they laughed at me. But here it is, within grasp.

But…despite my lack of copy over the past couple of months I’m getting back on it. There are things to say for sure. I want to talk about Raul Jimenez, Neves, Moutinho (Praise be his name), Patricio, Coady, Donk, Neto, Jonny, Doc, Jota, Traore…loads of stuff I have to get off my chest. Tonight is a big game. I hate all the negativity surrounding it already. The aggro, the Arsenal bollocks. It might be in Portugal but I’m drawing parallels with the arse end of our Championship promotion season when all I wanted was to fuck off out of that horrible division and every game was painful. I want us to win with style tonight. I want to see Loveball, I want to see Raul and Diogo run onto through balls, I want to see Adama slicing fullbacks into thin strips and see them sizzle on the grass. I want to see Donk towering and making positions his, I want to see Coady resolute and pure in front of goal. I want to see many things tonight but I think what I want to see most of all is Nuno love what he has made, what he has created for us.

Be nice to each other please. Make time to forge friendships that will last forever, find out about the places you will visit on your travels. It’s time for that I think, now.

View all posts by Michael Petalengro